First, let me first congratulate the Texas Rangers for their victory in the World Series last night.

I did not watch the game and am not very interested in baseball. Which makes me wonder why there are so many different types of sports and why people like the ones that they do. To some it is an addiction. It was, and is, for me and I am sure it is for you to some extent.

I am now hooked on NHRA Top Fuel Drag Racing, which, by the way, is on TV tonight. It will be the next to the last race of the season. I also hold season tickets for the one race per year when they run at the Houston Raceway Park located on the west side of Baytown. I never miss a televised event and can hardly wait for next spring to arrive so that I can attend the race and see and feel the thunder. One of my first few blogs was about the race. Click Here

Now, for my favorite sport that I have participated in, Ping Pong (or Table Tennis). As a kid I dabbled in it but was never really any good. Then I went off to college. I discovered a whole new type of player and what they could do to the ball was like magic. I had to learn to do that!

At that time, all students had to stay in a dorm for their first year. Our dorm had a storeroom down the hall from my room that contained a ping-pong table. Wasn’t that wonderful? All I needed was a teacher or mentor. I found one living two doors down the hall from me. His name was Jeff and he was about 100 times better at ping-pong than I was at the time.

To make a long story shorter, he was a great teacher and taught me all he knew. I learned fast and practiced every chance I had.

The building that contained the student’s Hub served food and drinks, had multiple ping pong tables, and was a place where most of the students hung out to study or to mingle. I went to watch the “good” ping pong players. I could see right off that I was at a disadvantage. The students from India had some new kind of rubber padded paddles that could put more English on the ball than they could speak.

The dorm had its own tournaments and the university wide tournaments were held at the Hub. I got pretty good, could beat most everyone who played in the dorm tournament, except Jeff, the guy who taught me. I was actually better than he was but must have had a mental block. If he got eliminated before I had to play him, I usually won the dorm tournament. I never won the Hub tournament, but did get hurt trying a few times. When you make the mistake of letting the other guy force you into a defensive role, he can have you back away from the table 20 feet or more then just drop one over the net with a lot of back spin. A fellow can get hurt bad trying to get that returned coming in from 20 feet away.

Many years later, when I put a couple of years in working at Smith International, I revived my ping-pong playing. In their recreation room they had ping pong tables and pool tables. They also held tournaments that were not just for employees, but open to everyone.

Times had changed and I could afford a “good” paddle. I think I got one for just under $50.00 but some of those guys had paddles that cost way over $100.00, and that was back in 1991. I played every lunch hour and sometimes after work. Practiced every chance I got and always tried to find someone a lot better than I was to practice with. Finally it got hard to find someone better, so I started entering some of their tournaments. I placed in three of the tournaments, but never got 1st place.

Here is a picture of my trophies: 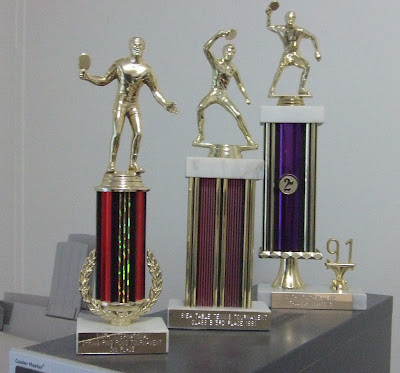 Here is one taken with a flash so if you enlarge it, you can read it better: 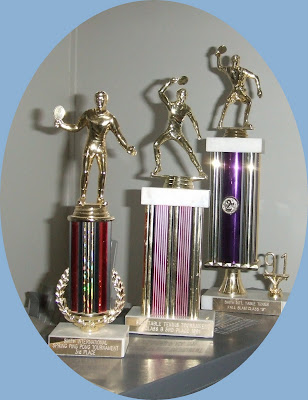 My right shoulder and right side of my back still hurt from that game. I got cracked ribs and sprained ankles. It hurts when you get hit in the eye with a 100 mph ping pong ball. But I loved it and would do it again if I could. I could make that little white ball do a lot of tricks.

By the way, these trophies are sitting on top of an old computer. I had it built in a Cooler Master case. That is the best computer case in the world. 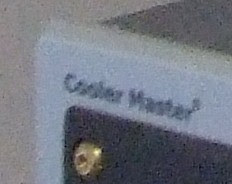 Have a good day and enjoy what ever sport you desire.
Posted by Dizzy-Dick at 8:04 AM