I wonder if we can ever be really secure. Well, of course not, but we can turn the odds in our favor with a little precaution. Precautions can run from weapons to surveillance, but the best is to just be wary and alert. Yes, but it can help to have weapons and surveillance systems. But, you can not take those with you everywhere you go. Let your eyes and ears be your surveillance and anything at hand can be a weapon.

OK, enough of that. I have a simple surveillance system at my home that I have had for sometime now and believe from Ben’s blogs that he does, too. I have one that can take up to 8 cameras but at this time, only have 3 hooked up. When there is enough light, they are in color but in low or no light they switch to infra-red and have infra-red LED’s all around the lens to brighten up the night.

You can view a single camera only, or a full screen view of all cameras set to switch to the next one at an interval of time that you choose, or you can view four cameras in one screen and switch automatically to the next four, if you have that many.

This is the first picture I took of the monitor looking out at the circle part of my driveway and where I park the motor-home and the Jeep: 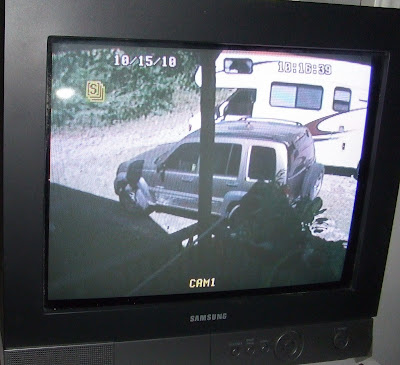 I took a second picture just in case the first didn’t turn out, and guess what? A narrow band showed up on the screen and went from bottom to top. See: 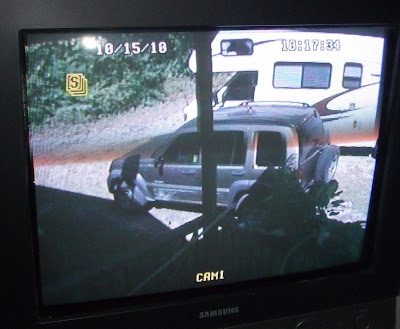 In the following pictures that dang band kept showing up either as the narrow one or a much wider one that would darken half the screen. Now tell me why did it not show up only in the first picture?

The next two pictures are looking at my deck stairs and path out to “the swamp”. See the wide band at the top: 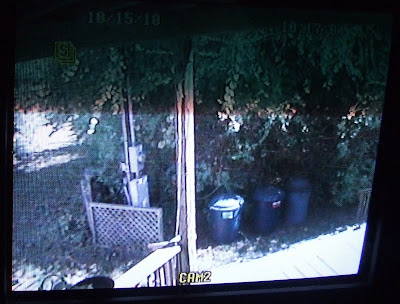 And a smaller band in this one: 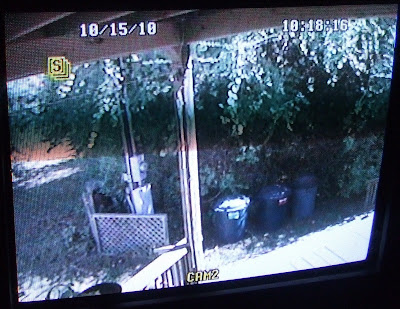 The next two pictures are looking toward where my driveway comes in and turns down toward the house. Both of these also have bands on them: 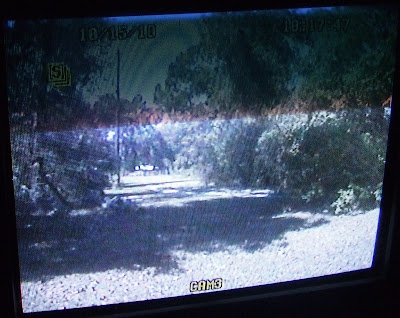 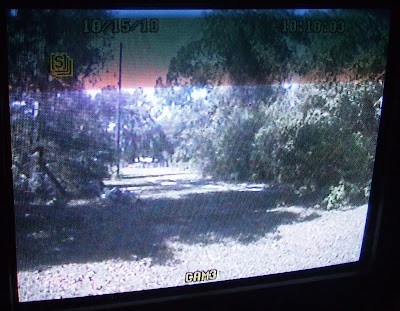 The next picture shows all three views at one time: 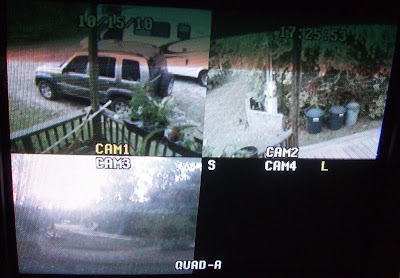 The night time pictures of the monitor didn’t turn out too good, but enough to see what it is like. If a person or animal where to come into view, they would show up brighter than the surroundings. Remember the first picture? Well, here it is at night: 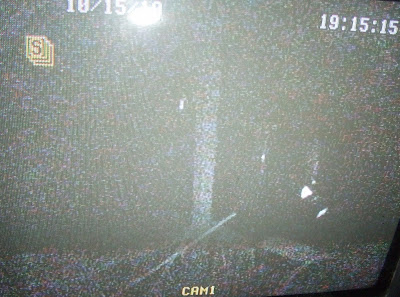 Did you notice that the tail lights of the Jeep looked like they were glowing? That is the reflection of the infrared lights.

On all these pictures, the flash went off and reflected in the upper part of the screen. That is what the bright spot is, in case you have wondering.

This next picture is the night view of the deck stairs. See the two square bright spots in the lower right? They are the reflecting stickers on my garbage cans. 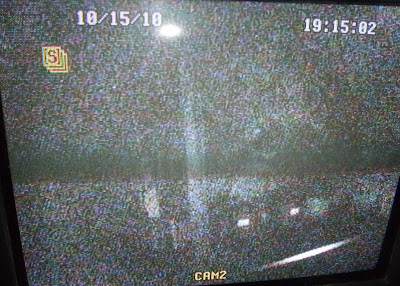 Did I tell you that all of the four cameras I have (one still in the box), also have audio in both directions. I usually keep the audio turned off because it bothers the dogs and makes them bark. The dogs do watch the monitor, especially when we are out of the house. Guess I could call them watch dogs. . .
I guess I should have waited to get better pictures, but since I didn’t, you will have to live with what I posted (grin).
Posted by Dizzy-Dick at 9:40 AM