Wandering down to the non-swamp.

I was asked a few weeks ago what my swamp/lake was looking like.  I decided to take my camera and let you all see it.  On the way down there I spotted where something had a meal: 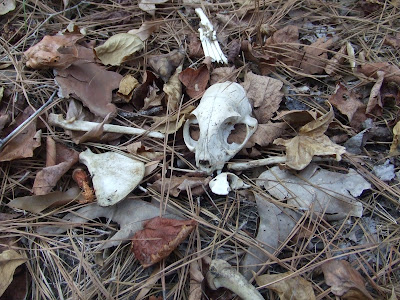 It was a small animal.  What do you think it was?  It could be a rabbit, a coon, a possum, a skunk, or something else.  The skull was a little too large to be a squirrel.  This next picture is of the deepest part of the whole place.  It still has moisture in the bottom but it is more like pea soup.  To the upper left you can see the bones of what used to be a huge pig. 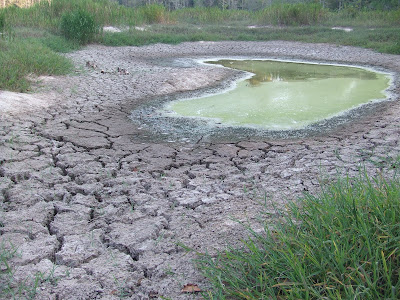 Here is a picture of what used to be the deepest part until I dug way down with the tractor: 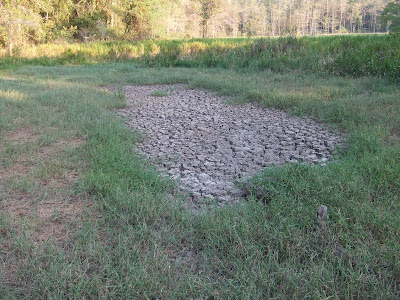 Compare the above to a picture taken a few winters ago of the same area: 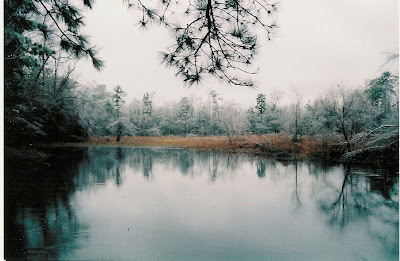 Enough of that, they are hoping that a tropical disturbance in the Gulf will move far enough west before turning north to give us some rain later in the week. Going to cross my fingers.

Yesterday, I stopped at the local hardware store and purchased a new 40 gallon hot water tank and a dolly to handle it with. Since I worked on the old one, it has been heating water just fine but the water has never cleared up; it is still red. I have high acid water here and also iron ore under the top soil and clay, so we have always had that problem, but the old hot water tank just does not seem to want to clear up. I thought that leaving it sit for the three weeks that we were on vacation would have let stuff settle out, but it seemed no better and in fact maybe even a little bit worse. So as soon as I post this, I am going to go drain the old one and try to get it out of the house and the new one in. They weigh more than I can lift, so will have to use my head instead of my back, or not.


Hope you all will have a better day than I am planning on having.
____

OK, I have been hard at work all morning trying to get that old hot water heater out of my house. I have not been able to do it. It fits in a tight opening both width and height wise. That was no big problem getting it all undone. Disconnected the water in and out and the gas and the flue. Then I tried to get it out. Has to be tilted about 30 degrees to get it out, no problem yet. Then I sees that it will not clear the gas pipe nor the water pipes that come out of the floor. Bummer for sure. I have tried blocks and pry-bars and maybe even a little bit of cussing. I give up for awhile. Will have to come up with a plan. Take down a wall maybe. . .
Even if I get it out, how will I get the new one in?