In a recent blog I told you about the old Gibson I had the privilege to hold in my hands. It was the one that my Uncle bought back in the 1930’s and his eldest son now has it. I failed to get a picture of it at the time but my cousin was kind enough to take a couple of pictures and send them to me. He had put new strings on it before he brought it to the reunion and I used my electronic tuner on it and got it tuned perfectly. He said that it is still in tune.

Here is a picture of the body of the old Gibson: 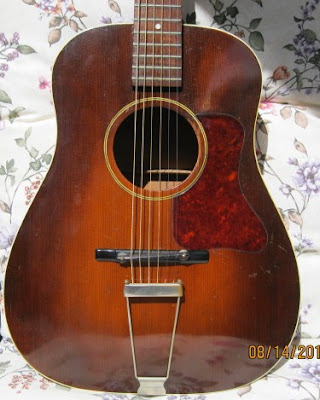 The next picture is of my cousin holding his Dad’s old Gibson: 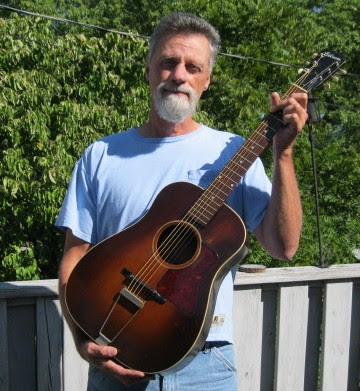 And remember the picture of his Dad with the same guitar? 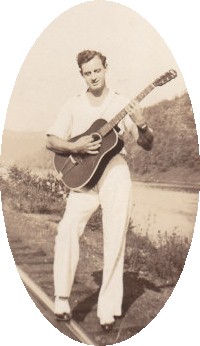 Did you check out his footwear? Pretty sharp, that must have been what he wore when he played in his small band.

OK, since I had never taken a picture of my Ovation, I did so last night.  It is an old one, but not near as old as my cousin’s Gibson. 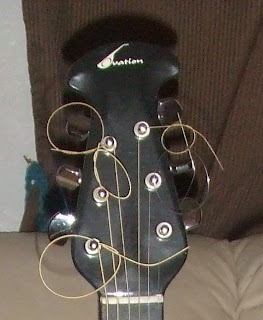 Twenty or twenty five years ago, I bought that Ovation used from a friend of my eldest son, who had bought it off someone else, etc, etc. Therefore, I do not know the history of it other than it had been played a lot but was good condition. I sure have enjoyed it and wouldn’t give it up.

The picture of the painting I had attempted of the misty forest at sunrise was painted using a photo out of a book as reference. I would glance at the photo from time to time to see what I had missed. I didn’t try to replicate it in its entirety, but just tried to paint something that looked close to it. Here is the photo out of the book: 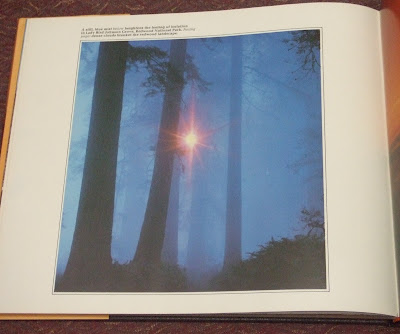 As you can see, I didn’t get it all that close. Compare it with my painting that I posted in yesterday’s blog.

You all have a great day now, you hear?