Wondering about the Pillars of Creation.

We all were awed by the photos that the Hubble Space Telescope has taken, and for that matter, still does.  I believe that the most popular and the one that showed up on all news media was the cold hydrogen gas clouds that were called the Pillars of Creation.  You remember that one, don’t you?  In case you forgot, here is the picture from NASA: 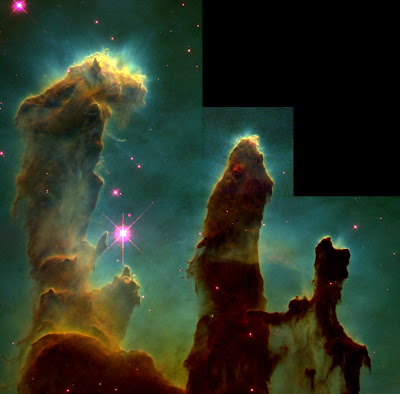 ﻿Now that I have refreshed your memory I would like to pass on some information that I just recently learned from reading last months Astronomy magazine. I guess that I never thought about the density of the gas cloud since the picture was so beautiful and awe inspiring that I was mesmerized by it. Look at the pillar on the left, the biggest one. It looks so solid and thick, but things can be deceiving.

The reason it is deceiving to us is that we are not used to looking at things at that scale. These clouds are not measured in miles, but in light-years. A light-year is the distance that light travels through space in one year. Now tell me that a distance like that is easy to comprehend?!?! OK, now let’s put some numbers on that cloud. It measures around 3 light-years and is around a half a light-year thick. The contrast between the pillars and the space around them makes them look almost solid. That is not the case.

They are still a wonder and I will keep on wondering about them, how about you?

You all have a good week now, you hear?