I showed you the pit area yesterday and today, only one picture will be of some old cars in the pit area, the rest will be of the race track.  Now remember, a run down the track only lasts about 3.8 seconds and it takes my camera almost that long to decide to shoot.  I do believe that my old camera was quicker but it didn’t have a view finder and in the bright light of day, the view finder comes in real handy.  That means that I only attempted to take pictures of the burn outs and the cars either waiting to run or backing up after the burn out.  What I should have done was put it in video mode, but I didn’t.  Anyway, here are a couple typical burn-outs:

The Gieco car won that round.  OK, a couple of top fuel funny cars.  They, too, run 1000 feet at over 300 mph but they usually run in the low 4 second range whereas the top fuel dragsters run it in the high 3 second range, but finish at the same speed.  The dragsters are quicker than the funny cars but not much faster, if any.  Here is Mike Neff’s car (who won the race) burning out alongside of the Kalitta’s yellow car:

This is Ron Capps burning out.  He made it to the last round but ended up in second place, Mike Neff won the funny car race.

How about one more funny car burn out, OK?  No???  Well I don’t care what you say I am going to show another burn out, so there!

To round out the top three classes, here is a picture of the pro-stock cars getting ready to launch.  The pro-stock class races the full quarter mile vs. the top fuel cars which only run 1000 feet.  Of course I had to take a picture of my wife’s favorite driver’s car. 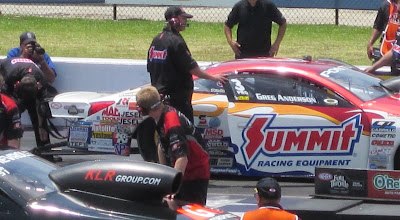 There were alcohol dragsters, alcohol funny cars, pro-stock bikes, slot races, and all sorts of classes that fall in between the top fuel runs.  The top fuel cars are given seventy five minutes to completely rebuild or replace their motors.  The pits in between runs are a hectic place.  Walk by and all you see is asses and elbows.  And oh yea, here is a picture of the seat in front of me, one of the three that I paid for.  My original seat is one row up from the other two.

These seats are directly up from the tree.  I think that it is a very good location.  I saw an old “woodie” that I snapped a picture of to show you all.  My uncle had a woodie back when I was a kid.  Always liked that car. 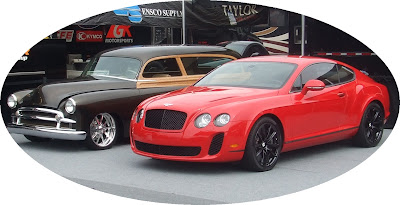 OK, I will not bore with drag racing again until next year.  You all have a great day now, you hear?