Yep, I made my yearly trek to the Top Fuel Drag Races and got there and got back in one piece.  I must be getting old because when I got home and ate supper, I had trouble staying awake to watch it on TV.  In case you ever want to watch them, they are on ESPN and I believe there will be another one next week.  Usually they have two weeks between races.  Anyway, I am going to show you some pictures that I took when I first got there.  Getting in is easy, they remove the toll from the toll road and close the road in front of the racetrack for one way traffic only.  They direct you into this huge parking area and I was anxious to get into the race area that I forgot to count the rows to where I parked.  No problem, I found it; was only a couple of rows off, but spotted it.  Of course it took a lot longer to get out of the parking lot than getting in

I always go out to the pit area and walk through and get up close and personal with the cars, pit crews, and drivers.  I will show you some pictures I took in the pit area today and tomorrow I will post the ones I took of the race.  This first picture is of the winning top fuel dragster, but I didn’t know it at the time; I can’t see into the future.  Morgan Lucas drove his Geico car to the win and a big trophy and lots of money. 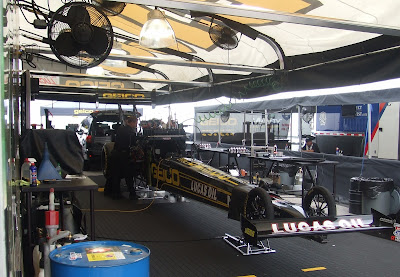 Of course what would a drag race be without John Force and all his drivers and cars?  One of his drivers, Mike Neff, won the top fuel funny car race.  Here are the pits of John and his son-in-law, Robert Height:

And just a little bit further in is John’s other racing daughter, Courtney.  Ashley took leave to raise her new baby and Courtney is filling in for her and doing a great job. 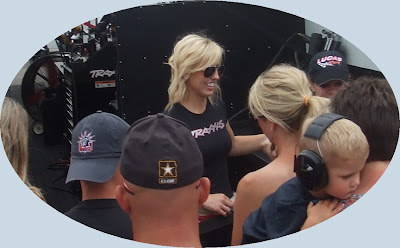 If you don’t think this is a big event, here is a picture of just one of many streets lined with pit crews.  I would bet that there are more people associated with the cars than the amount of paying spectators.  This huge “city” should have disappeared by now. 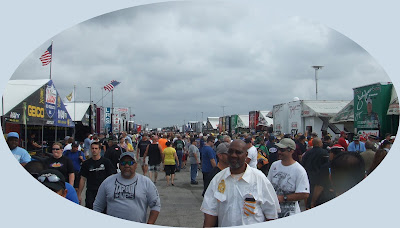 Here is Ron Caps letting a spectator get her picture taken with him.  He is a friendly fellow and came in runner up. 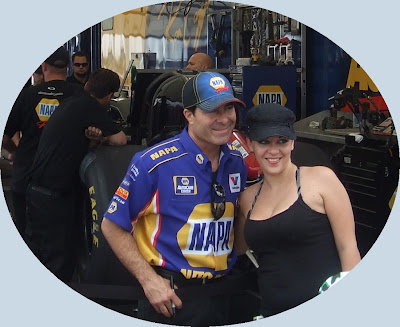 Here is the Kalitta team getting their car ready for the first race: 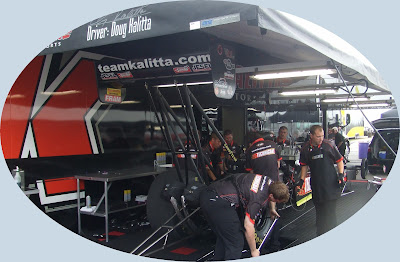 And here is my wife’s favorite driver, Greg Anderson who drives a Pro-Stock car.  The Pro-Stock cars run the full quarter mile, whereas the top fuel cars only run 1000 feet. 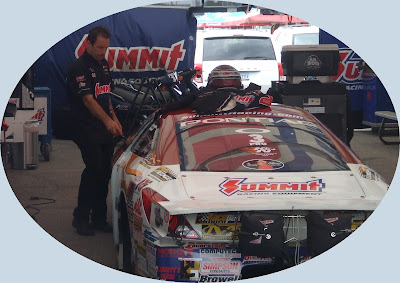 There are a lot of neat cars sitting around and this is one of many: 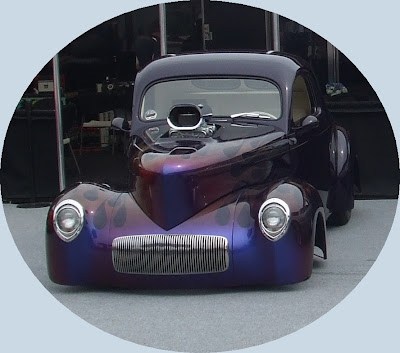 OK, that is enough for today.  Will show you some race pictures tomorrow.  You all have a great day now, you hear?