Old Friends and the Daytime Moon

On nice clear days like we had yesterday (and predicted to continue) it is nice to be able to see the moon in the daytime. Here is a picture that I took yesterday at about 17:30 (5:30 pm): 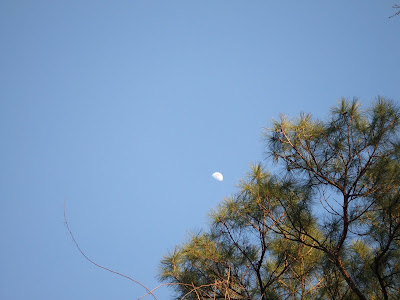 And a closer view: 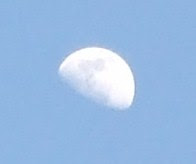 Sometimes, to me, it seems that the sun is not in the right spot to create the light and dark parts of the moon. But where we stand here on earth, it is hard to get the correct perspective. Half of the moon is always bathed in the sun, except in those rare occasions when the earth gets in the way and then there is a lunar eclipse. Like yesterday, from where we are, we don’t always see the entire lighted surface.

I reconnected to an old friend who I had lost contact with for many years. He was my “Best Man” at my wedding, even though we eloped. We had a church wedding and even had a couple of guests. This friend of mine had an exciting, varied, and unique life. He went to the Merchant Marine Academy and spent some interesting years on a ship as an engineer shipping war supplies to and from Viet Nam. Then he joined the Navy and became one of those Navel Air pilots that land a jet on the bobbing decks of a moving aircraft carrier. After the Navy, he became a commercial pilot and then I lost track of him until just few weeks ago.

What was funny, we both attended a class reunion. The reunion that year was for 5 different classes, I think that graduated in 1959 through 1963. Just this morning, I got an email telling me he did attend that reunion and told me where he was in the class picture. I got it out and sure enough, there he was, plain as day. We had both changed a lot, especially me. I don’t understand why I got so old and he didn’t!?!?

I told before about finally contacting him in my blog:
http://dizzydick.blogspot.com/2011/01/wondering-again-about-old-friends_24.html
Like I said then, the last time before this, when I tried to locate him, he was living in England. He has sure had an exciting life and am now looking forward to a time when we can get together, sit down over a cup of coffee, and talk about old times and our lives since then.

You all have a great day now, you hear?
Posted by Dizzy-Dick at 8:42 AM