Wondering if the buzzards are after me?

The doctor switched blood pressure medicine on me and yesterday I felt really bad. Just thought that it was side affects from the new meds. Woke up this morning still feeling poorly, really poorly. Took my blood pressure and it was sky high, you know, the lower reading being where the higher one should be. I took another pill and will give it one more chance; I will then call the doctor if the readings do not go down. I need to go out and walk a bit.

So, yesterday afternoon, we pulled into the driveway after running some errands and my place was overrun with buzzards. These are not turkey vultures, since they do not have a red head. I wonder if they are migrating north already. There were a lot of them, but some were flying real high and others just skimming the trees and some would sit down for awhile. Here are some pictures I tried to get of them. They really did not cooperate with me, they must be camera shy. I missed some really good shots, one was when 15 or 20 of them took off at one time. If you are not already pointing the camera with your finger on the button, you can’t get that shot. The following were my feeble attempts at trying to capture at least a few of them. 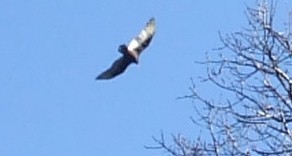 Here are six of them in a tree close to the house: 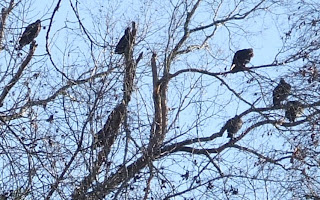 A view showing a couple of trees:

And looking straight up an old tree at one that refused to move: 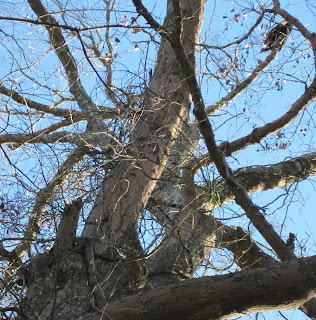 And some coming and going in a pine tree: 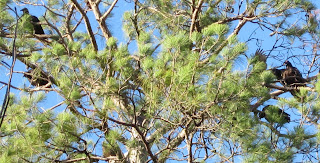 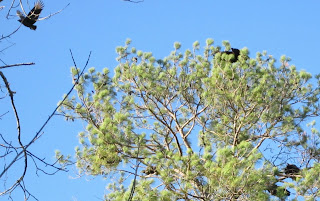 Now, if you don’t hear from me again, you know the buzzards got me.  You all have a great day now, you hear?
Posted by Dizzy-Dick at 8:54 AM