What did I get? Let me tell you, it was a rough road. Every time I tried to buy this RV that I wanted, someone beat me to it and it was then listed as “sale pending”. That happen a few times and then one day I saw it back listed “for sale”. I called the salesman and he said he was sorry, that there was someone right at that moment trying to make a deal. Well, he called back the next day and said the guy couldn’t get financing and/or couldn’t reach a trade in agreement. So I jumped on it. Now I am a proud owner of my first class-A motor-home! It was a hassle getting it ready to go and we didn’t get out of the sales lot, which is located on the far south side of Houston, until 17:00, putting us smack dab in the middle of rush hour and I had to drive it the whole way through Houston and then on home. For the first time I ever drove a class-A, I had to learn real quick in traffic like that.

It was way after dark when we got near home and of course the fuel tank looked like it was almost empty, so I stopped and filled the tank. It is suppose to hold a hundred gallons, but only took 75. Still, at the cost of diesel, that put a dent in my wallet for sure. I never wanted a diesel, but after finding this unit that had every single thing on or in it that we had on our “wish list”, plus a lot more, I bit the bullet and got the diesel. They do seem to be built better.


Here are a couple of pictures of the inside that were taken by the RV sales place: 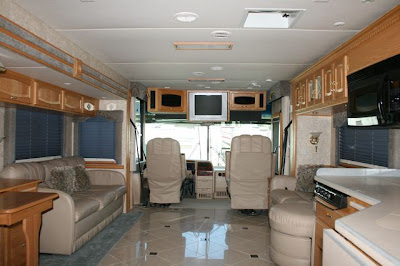 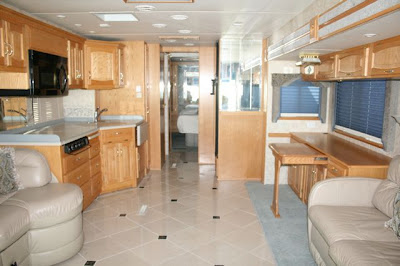 Of course, being dark and all, I managed to squash the big expensive automatic power awning on a tree trying to make the last curve in my drive way. Remember that tree that had the woodpecker holes in it? That’s the one, it leans out over the drive way and since it was dark, I couldn’t see in my mirror. Dang it anyway!!  As soon as I find someone with a chainsaw, that tree will be gone.

Here is a picture of where I let it sit for the first night. I didn’t want to try to maneuver it around in the dark and I was exhausted from the long day. 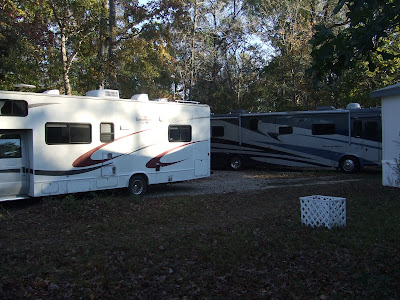 And close up of the awning damage (I will get better pictures today when the sun gets above the trees. 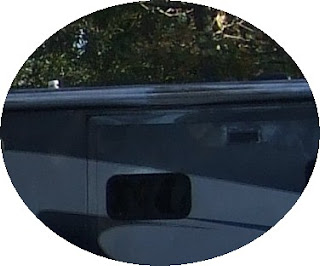 And one more I took while standing on the porch. 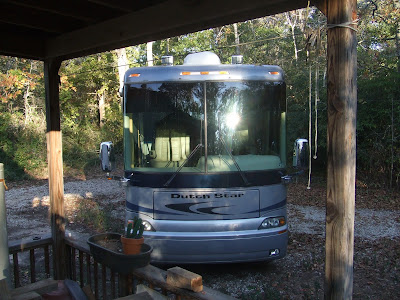 Yesterday, we moved it into its berth or home parking place and got it plugged in to the electric. Then I parked the Class-C next to it, between it and the house, and was able to plug it into the electric, also. All worked out, so far.
Now, I got to get busy on a paying job that needs completed by next week. So you all have a great day, you hear?