Just some Wonderings and Ramblings

Some things sound strange but when tried, we find out that they are really good tasting. When I was a kid, my favorite sandwich was peanut butter and sweet pickles, especially candied dill strips. I suppose the strangest combination that I ate (learned it from my Dad) was prepared horseradish (horseradish with vinegar) on chocolate cake. Yum, Yum. No icing, just horseradish.

I may have mentioned in some past posts that my wife has been making cards and I have been writing the rhymes to go with them and we send them to my Aunt who broke her hip. We feel it gives her something to look forward to and may help keep her spirits up.

Well, I decided to make a few. I made one that was hilarious, it least I thought so. Didn’t scan it or take a picture of it so can not show it to you. I made up a couple over this weekend to send to her this week. Now, don’t you tell her about them, you hear?

The first thing I did was to alter some pictures of my Aunt and her family (and me), resize them to fit, cut them out, and paste them on play money where a presidents picture is suppose to be. Already sent them to her.

Found some pictures of old cars, so scanned a couple of them and resized them to fit on our blank card stock that fits into the envelopes that came with it. Then I found appropriate pictures of my Aunt and her family, selected and clipped the part I wanted from the original, resized them to be proportional to the car size, and placed them in and on the car. Then I scanned it and pasted it on the blank card. Wrote a poem and put it on the front of the card. This first one was simple and fairly easy to make. Here, see for yourselves: 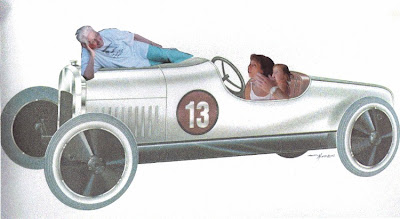 Then I decided to get fancy. I put pictures of my Aunt and Uncle (before he passed away) in the front seat of an old car and pictures of them when they were young in the back seat. My wife suggested that I use a background. Now that sounded easy to me, right? WRONG!!
I found what I thought to be the perfect background, since it had a road in the foreground to put my car on. It was a picture that I took of Canyon Lake, Arizona. Now came the hard part. I had to cut out everything, even between the spokes of the wheels, to let the background show through and look as natural as possible. This was turned out to be a time consuming job, but when it came off the scanner, the work and time was worth it. What do you think? 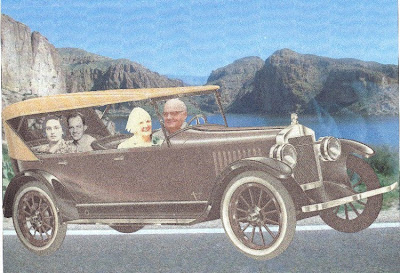 Well, you see what takes up some of my time. My wife is so much better at coming up with unique and beautiful cards than I am. But maybe my cards will be such a shock that my Aunt that she will appreciate my wife’s cards even more.

Note: I decreased the picture sizes for this blog, so they may not enlarge very much.
Posted by Dizzy-Dick at 8:53 AM