Let me start from the beginning. My wife found her when she was a puppy, weaned and for sell. My wife knew a fellow who was looking for a puppy of that type, a Peek-a-Poo. They are a cross between a Pekinese and a Poodle. So, she purchased her and brought her home. Since the fellow who wanted the dog was not available until the following Monday, we had to keep the puppy over the weekend. Those two days were enough for me and the puppy to bond. That bond would never be broken, not even after her death.

She was fed and had plenty of fresh water to drink. When she fussed, I took her out. For sleeping, a box was found, and with the proper padding was placed beside the bed on my side for her to sleep in. When we went to bed, I would lie on my stomach and dangled my arm down into the box so that I could touch her and make her feel safe. She would lick my hand and go to sleep. A couple of times that first night she became fussy and whined. I would get up and take her out. Then she was brought back in to her box and she would go right back to sleep. That whole weekend, she never once had an accident in the house. This was no ordinary puppy.

There was no way that she was going to leave me!!! Since my wife had not called the fellow yet to tell him she had a puppy for him, I convinced her to not call. No reason to, she is staying and was named Buttons.

She loved to be with me and she also loved riding in the pick-up. At that time we had a truck that had a bench seat and a pull down arm rest between the left and right side, wide enough so both people could use it. That became Buttons’ seat. She loved to sit there and look out as we drove down the highway. We had a long driveway that came back past a neighbor’s fence. Inside that fence were always two or three rat terriers. Buttons would just love to bark at them and get them to chase the truck back the driveway; a trick that she taught another dog, Muffin, who we got a few years later. And then she passed it on to our next dog, Chang Le. Gizzy, our youngest, was just never interested.

Buttons went on all our trips. She even stayed in motel rooms. When we got our first travel trailer, she took to RVing with a passion. She usually laid in my lap while going down the road. When we got the motor-home, she still liked to ride on my lap, but my wife would sit on the couch and sometimes Buttons would go back and lay beside her. She would not let me out of her sight. If I left, she would lay by the door and cry.

The one problem we had with her was grooming. She liked to run ahead of me when I would go on walks, and more than once she got herself into a mess involving plant parts that would get into her thick undercoat and stay there. She was so bad once that I couldn’t do anything with her, so took her to a groomer. When we went to pick her up, I didn’t recognize her at first, she had been shaved.

That was a traumatic experience for her and she didn’t act right until her hair grew back. Even after that, up until the end, she would uncontrollably shake if she heard any buzzing sound that reminded her of the clippers. It was nigh unto impossible to groom her or cut her nails. She wouldn’t even let me do it.

Buttons, even though she had her faults, was the best or tied for the best dog in the world and absolutely the best in my life. When I was a kid, my brindle colored boxer, Brinda, would hold second place.

This year, I noticed that she was slowing down. She could not hear very well, and I noticed cataracts forming on her eyes. She didn’t have the advantages that I did. I had hearing aids and had my cataracts removed. She also started sleeping most of the time.

I knew that she was really old. Eighteen years old is really old for a dog, even a small dog like Buttons. But the inevitable is still hard to take and accept. I wanted to put it off as long as possible.

She was still able to get up and down stairs, and would still bark at the Pig when it came around, so I figured she still had some time left in her. Then, she quit eating. She never gulped her food down like some dogs and sometimes she would not finish her meal. She only ate slowly and only what she wanted. Two of my Shih-Tzu’s would eat themselves to death if you put enough food down in front of them.

I used a syringe to make sure she got some nourishment. Wanted something that would give her energy and I figured that she would snap out of this, given enough time. I used cream of chicken soup, melted vanilla frozen yogurt, and things like that. I was going to give her baby food but the ones I found all say they had onion powder in them and that is not good for dogs.

She grew weaker and I had to carry her in and out when she wanted to “go out”. Then, she stopped drinking water on her own. So, I kept her hydrated by using the syringe. Sometimes she would want out, and when I carried her out, she would throw up the water. She got so weak, that I had to hold her up so she could go to the “bathroom”. But, no matter how bad off she got, she never went in the house. From the time she we got her as a just weaned puppy until the day she died, she never went in the house.

It was ten weeks ago from 8:30 pm last night that she passed away. I have been wanting to make a post about her, but have not been able to do it. It is still hard and I have tears in my eyes. I so loved that dog and she so loved me. There never was and never will be another Buttons.

Some pictures of Buttons. 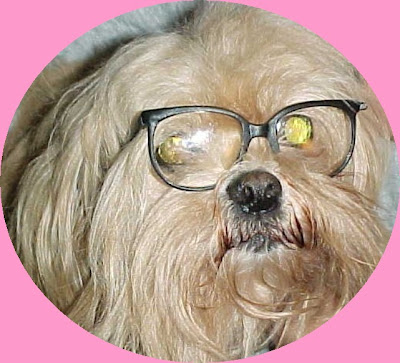 Me and Buttons on a walk: 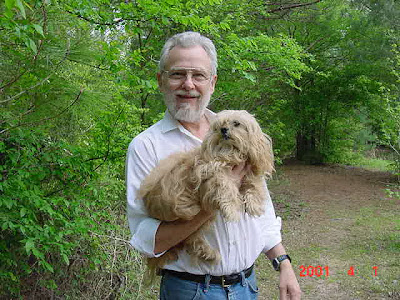 Buttons all prettied up: 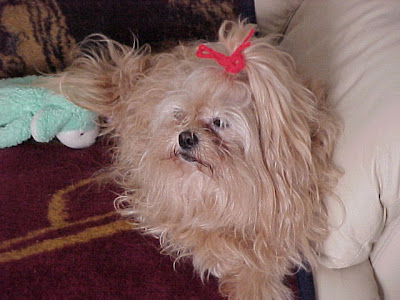 Buttons and Little Bit with my wife at a motel on a trip before we had a RV: 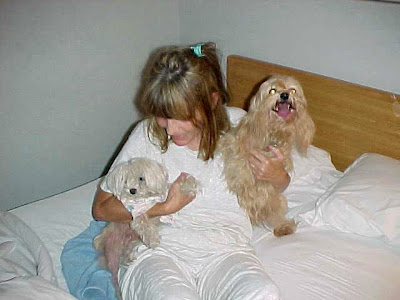 My Mother, Me, and Buttons at the Assisted Living Home in Pennsylvania: 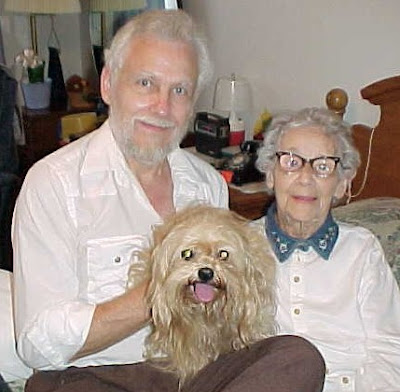 Buttons, my wife, and her mom: 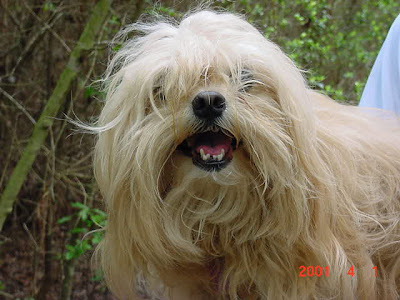 Buttons on my wife’s chair: 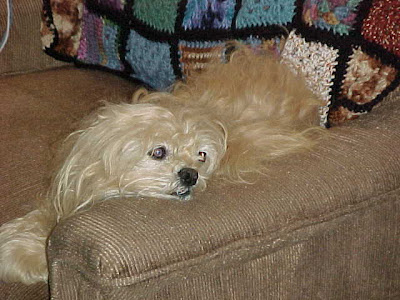 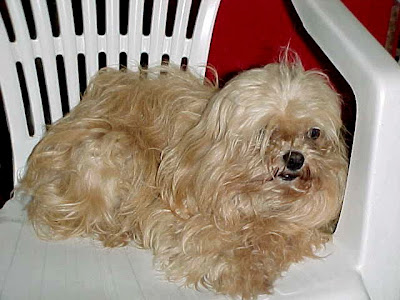 And the last two pictures of Buttons taken just a couple of days before she passed away: 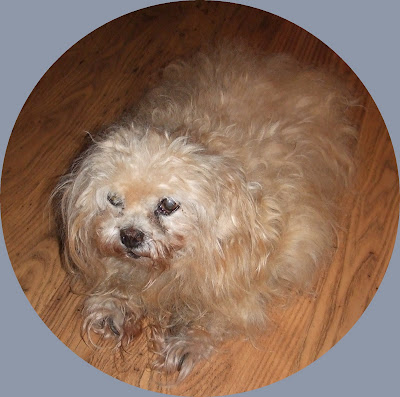 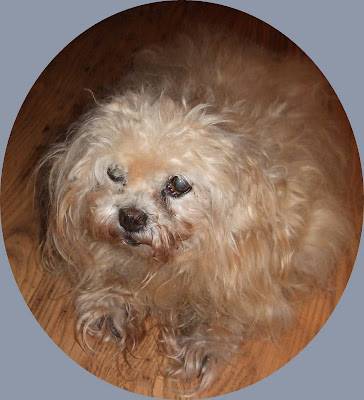