THE REST OF THE PIG STORY

And a good TGIF day to you. As promised yesterday, I will tell the rest of the pig story, starting from the beginning. It all began back in the Fall of 2006. I discovered a lot of rooting around my place and didn't like pigs tearing up everything, so started to carry a gun with me while out walking around. I spotted this small pig under a big Oak tree and before I could get my gun up, it was gone. . . and I mean, it ran faster than a deer. Never did get a good shot at it. Only time I could have, it was in line with a neighbor's house and I couldn't shoot.

My son lives on the back of my property and he said he had seen the little pig rubbing up against his fence with one of his dogs on the inside and the pig on the outside. In jest, I told him he ought to let the pig in. A few days later I was walking past his place and saw the pig in with the dogs. I phoned him at work and said "I see that you took my advice and let the pig in the fence". Well, he said that he definitely did not!

Seems that little rascal some how got under the fence. From then on, it thought it was a dog, I do believe. And for some reason, his two big dogs took to it, but his little Yorkie, did not. This picture was taken in October, 2006: 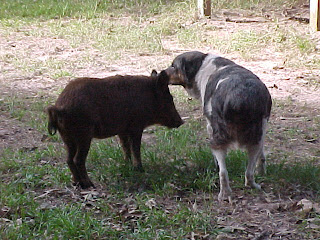 It started growing, but stayed in the fence with the dogs. We could hand feed it, but it didn't like people and got real nervous if it could see more than one person at a time. This next picture was taken in May of 2007. She had started to grow. 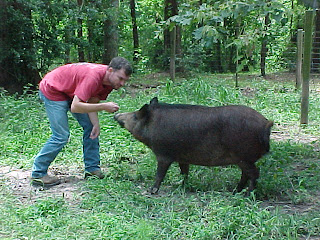 She got real nervous when there were more than one person around and would hide if that person was not my son or me. As she grew she seemed to get less satisfied and finally broke out. She kept returning now and then for food and to sleep under his porch, but the visits became less frequent and far between, until she reverted back to wild again. This pictures was taken just at the edge of the mowed part of my back yard: 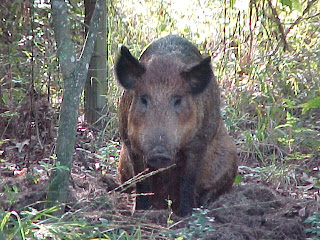 My four dogs did not like her. At first she didn't bother with them, but as time went by, she tried to break in to either get them or to play with them. Either way, it would be very dangerous for the small dogs. Now, everytime the pig shows up, I have to run out and bring the dogs in before she comes through the fence. Which she does quite ofter 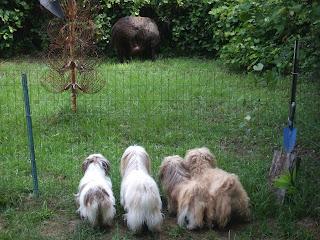 OK, not only was she a wild girl, it looks like she was a "bad girl", too. This next picture was taken in May of 2009, and she had developed milk and it looked like she would have a litter some time soon: 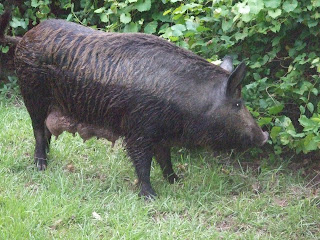 Yep, she had eight little black piglets. She liked to come up in my back yard and nurse them. Here is picture of a few of the piglets nursing: 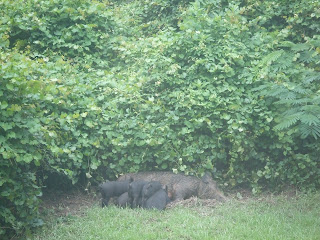 The piglets disapeared, and later I saw that my son had a pig trap and must have caught them. Mama was too smart for that. So she is still around. The following picture shows her after she broke down the dogs fence standing at the foot of the stairs to my back porch. She seems to be wanting to come in, or is she wanting us to come out and "play"? 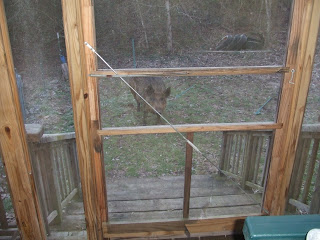 This last picture shows here earlier this year after she broke into the fence. You can see one of the posts that she pulled out. She puts her snout under the fence and raises it up. But sometimes she just busts through. She has even broken off a couple of the posts. Looked like they were sheard off at ground level.
Because of her beginning, I am hesitant to do away with her. But, I must admit, it would be better around here if she were not here, but it would be less exciting. . . 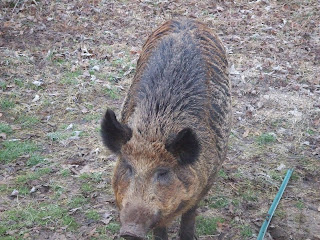 You all enjoy your weekend, you hear?