My Wife Got a Present.

Our daughter-in-law stopped up to see us yesterday and brought my wife a beautiful hanging pot of flowers.  I would try to describe them to you but a picture is worth a thousand words and I sure don't feel like typing a thousand words, so here is the picture: 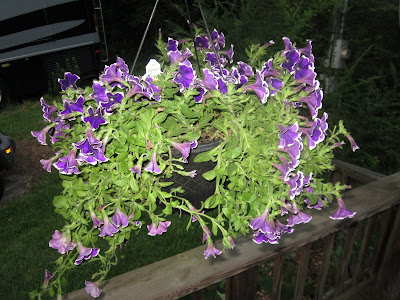 Now, ain't they purty?  We both thought that it was really nice that she would do that and we both appreciate her kindness.  Now, you all have great day, you hear?
Posted by Dizzy-Dick at 4:17 PM 24 comments:

Phew, Got That Done for this Year.

My wife needed to get her driver's license renewed which runs out on her birthday in a few days.  We got up at 06:00 so to be there early before it opened.  Guess what, everybody and their brother and their sister and their mother and their father and their grandparents, etc. were already there.  The line stretched for a long LONG way.  Yep we had some wait time but after it opened, the line started moving in short start and stop movement.

After waiting in line for all that time, I decided to get mine renewed, also.  Since mine will run out on my birthday next February, why not do it now and not have to come back and stand in that long, long line again.  It actually was not all that bad.  Most of the people in line were willing to start up conversations, which helped the time fly by faster.  Glad to have that done and it will be awhile before we have to do it again.  The only test we had to take was an eye test, which we both passed and I did it without any glasses.  You see, since I had my cataracts removed, I have implanted lenses and I chose the type for distance viewing.  Yep, I need reading glasses for close work like writing this blog.  Now, you all have a great day, you hear?

After my second year of college studying engineering at Penn State, money got tight, so I went looking for a job.  I got a job as chicken cooker at a burger joint and restaurant in town.  My very good friend, Rodney from high school, stopped at our house one night and told me to be at the personnel office at Pullman Standard and I would have a job working for his Uncle.  He said it was only a labor gang job but at least it paid well.

As you may guess, Pullman Standard made railroad cars.  Their specialty at the Butler plant was covered hopper cars and flat cars (trailer train cars).  Here is a picture I found on the web of a trailer train car: 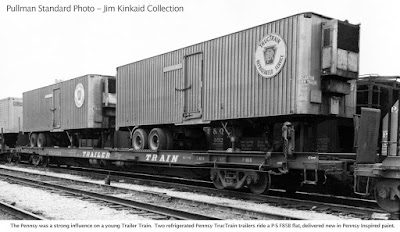 And here is a picture from the web of a covered hopper car: 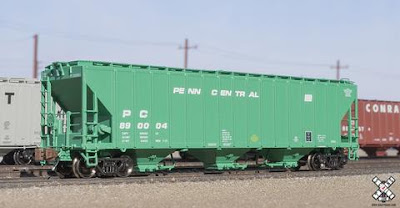 They made other types of cars, also, but these two were the most produced by Pullman at Butler.

After working almost two year in the Labor Gang, some of the time as a gandy dancer, a fellow worker found out I had a couple years of college and suggested I put in an application at the engineering departments.  So, I did and that put an end to my gandy dancing.  Much later in life after moving to Texas, I became best friends with Jimmy Gandy, and no, he did not know what a gandy dancer was.

A gandy dancer is a person who lays track for railroads.  Since Pullman built lots of railroad cars, it had to have a lot of tracks that needed maintained.  Jacking up the rails and replacing old rotten ties was one of the jobs that needed done.  During my first couple of years, before I moved to the engineering department, I worked as a gandy dancer among a lot of other jobs.

OK, enough about work, it is wearing me out.  So, you all have great evening, you hear?
Posted by Dizzy-Dick at 5:01 PM 19 comments:

A Special Day for Texas

Since I live in Texas, if this hadn't taken place on this day in history, I could not live in the state of Texas.  Why?  Because it would be Mexico.

Yep it was on this day back in 1846 that the U.S. Congress voted to declare war on Mexico in a dispute over Texas.  After about two years of fighting, the signing of the Treaty of Guadalupe Hidalgo (signed on February 2, 1848) which made the Rio Grande the southern border of the U.S. with Mexico, officially made Texas a part of the U.S.  By the way, I am old and I live in Texas, but I am not quite old enough to have been an eye witness to all of this.

Just thought that you would enjoy reading about this little bit of history.  Now, you all have a great day, you hear?
Posted by Dizzy-Dick at 12:56 PM 13 comments:

This morning I noticed something different in the dogs' fenced in back yard.  It was near our bird feeders.  Since I have no idea what it is, I hope someone can tell me.  Here is the first of two pictures that I took: 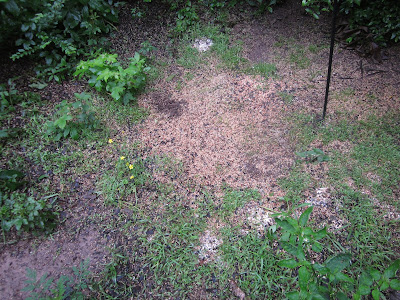 There is some of that white stuff spread near the foreground and a concentrated round pile of it in the top center of the photo.  That pole you see is what holds my birdfeeder and the light brown stuff on the ground is birdseed.

Now, here is a closer view of the round pile at the top of the first picture.  It is little white balls a little bigger than the grains of bird feed: Maybe it is mold growing around each individual grain of bird seed, but why wouldn't the dark sunflower seeds have any growing on them or maybe something ate a bunch of it and threw it all up?  We have had a lot of rain and everything is damp outside and we are supposed to have a lot more coming.  Maybe I should get some water wings, what do you think?  Now I hope you all are having a great day.
Posted by Dizzy-Dick at 12:03 PM 11 comments: