We may not be alone!!  But all the aliens are very far away.  Why do I say this.  Well, some astronomers have been planet hunting and have bagged quite a few of them, some of which are near Earth size.  The actual figure of known planets that we have found so far is 2740. 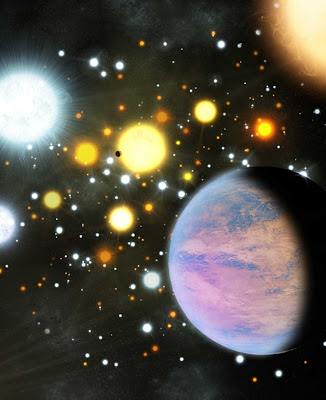 Three hundred and fifty one of them are Earth size.  Some may be in their star's habital zone, and even if they are not, some may have places on it that can support life as we know it.  Of course there could be other forms of life.  We on earth are carbon based life forms but there may be silicon base life forms, also.  Sometimes the silicon chip in my computer thinks it has a life of its own. . .
Yesterday, Billy Bob of  Billy Bob's Travels  asked me to post a picture of the 3D card.  I told him that it would not show up very well and of course the 3D part sure wouldn't.  He insisted so here is the card that Jill of  "Recycled Daze" sent to me (the damage in the lower right corner was probably done by post office sorting machines):
﻿ 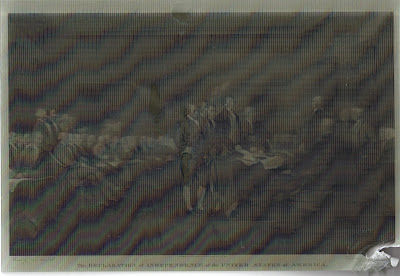 ﻿
﻿
So, I have taken you from outer space to back in history to the signing of the Declaration of Independence.  That all for today, so have a great day, you hear?