I bet most of you have never heard of Putnisite.  I actually only came across that word this morning when I was leafing through my newest edition (January/February) of Discover.  It was number 96 of the top 100 stories of 2014.  The reason it caught my attention was the picture posted.  It was a beautiful purple against a green background.

This must be a rare gem because it was first discovered by a Western Australian mining company in 2006.  Now ain't that purty: 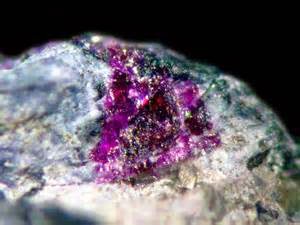 How about one that is more on the blue side: 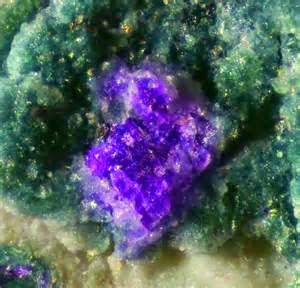 Remember I told you above that it was first discovered in 2006?  Well, after eight years of analysis it was announced earlier this year that it is an unknown substance and would be named Putnisite in honor of Christine and Andrew Putnis.  Putnisite has both style and substance.  According to the article in Discover, "The shimmering mineral has an otherworldly look, and while most new minerals are chemically or structurally related to other known minerals or synthetic compounds, putnisite is unique on both fronts."
So, every now and then there is something new under the sun. . . well maybe not, because this stuff was not under the sun, it was below ground level.  Yep, that is why a mining company discovered it.
Now you all have a great day, you hear?﻿
Posted by Dizzy-Dick at 11:31 AM