When you were a kid, did you like to get a box of animal crackers, open it up, and look at all the animals that were in it?  When you ate one, did you bite its head off first?  Do you remember what all animals came in the box and which ones did you like the best?  Actually, there were a few different kinds of animal crackers, but when I think of them, the Nabisco Barnum's Animals crackers are the first to come to my mind: 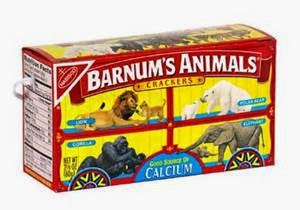 Here are three more boxes with different pictures on them: 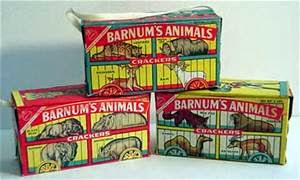 And do you remember what some of the cookies or crackers or what ever you call them, look like? 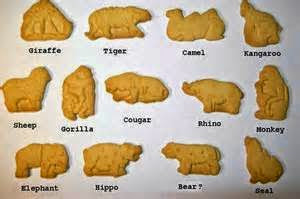 Over the years the animals changed and I hear that they are now coating them with chocolate!!  According to Wikipedia.org, there have been 37 different animals featured in Barnum's Animals Crackers since 1903.  The animals in the latest list are bear, bison, camel, cougar, elephant, giraffe, gorilla, hippopotamus, hyena, kangaroo, lion, monkey, rhinoceros, seal, sheep, tiger and zebra.  In 2002, to celebrate its 100th anniversary, they added the koala.
The other companies, Austin Zoo Animal Crackers, Cadburys Animals, and Stauffer's animal crackers have their own mix of animals.  I can remember way, way back 60 some years ago when I used to play and eat animal crackers.  Yes, that was one time and one food that I was allowed to play with (grin).  Now, eat your animal crackers and have a great day, you hear?
﻿
Posted by Dizzy-Dick at 6:12 PM