Muffy, before and after.

This was grooming week and Wednesday was the day.  We dropped the three mutts off at 09:00 and they called to pick them up about four hours later.  They sure were glad to get home and since they get their daily feeding at noon, they stood around looking up at my wife saying, "Let's eat, let's eat!"  And of course, they got their wish since my wife had cooked up their food while they were gone.  It is always great to have them back again even though they were only gone for a few hours.  Yes, the house seemed so quiet and lonely when they were gone.  They are our kids you know!!

I took a picture of Muffy before she got groomed and after she got back home.  Can you see any difference?
Before: 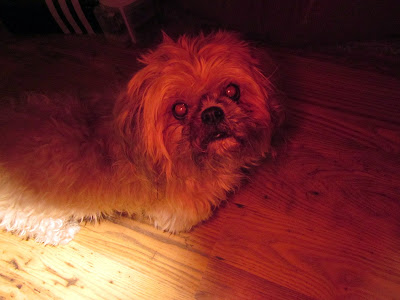 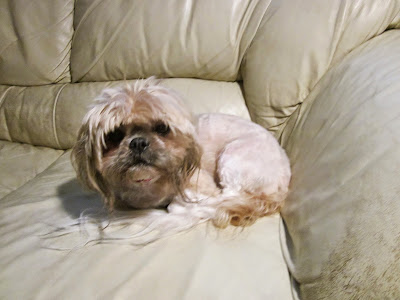 Sorry about the lighting in that first picture.  Somehow, the camera malfunctioned and red focusing beam was still on when the picture was taken.
Then of course, since the oldest gal got her picture taken, the youngest wanted hers taken, too.  This is before grooming:﻿ 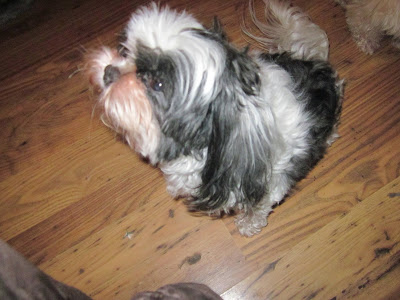 Mr. Chang Le, for some reason, didn't get his picture taken.  He pretty much looks the same before and after grooming.  He doesn't have an undercoat like the gals do and his hair is long and straight, but he does feel softer and smells better after grooming.  He thinks he is king around here and is always found sitting beside my wife in her chair.  Now, you all pat your pet on the head, if you have one, and have a great day, you hear?﻿
Posted by Dizzy-Dick at 11:22 AM