Wondering About Some Facts.

I think I will fortify and stimulate (or bore) you with a lot of useless facts.  So, if you are brave enough and have nothing better to do, read on:

"Every second, Americans collectively eat one hundred pounds of chocolate"


If I would quit eating chocolate, the pounds of chocolate eaten would be drastically reduced!!

In 32 years. there are about 1 billion seconds!

People use the world billion with ease about all sorts of things without regard of how large that number is.  The government talks about spending billions and billions and even trillions without much thought of just how much that is.  So, if they paid that much back at a rate of a dollar a second, it would take hundreds of years.  Just think about that for a minute the next time you see the figures for the national debt.  BTW, as of right now (2/24/15 - 10:59 am) the debt is $18,136,189,300,825.

Men are 6 times more likely to be struck by lightning than women!

Gee, I wonder why that is?  Maybe it is because men are taller?? Nah.  Or maybe it plays out like this.  A storm is coming on fast and the wife tells her husband to hurry up and go out and take down the flag from the tall, metal, grounded, flag pole. .

That is a lot bigger for sure, but numbers don't really paint that good of a picture, so how about one of those pictures that is worth a thousand words: 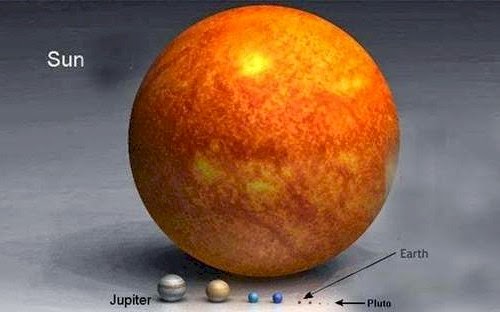 The above picture shows the sun in comparison to all the planets.  Bet you had no idea that there was that big a difference in sizes, or did you?  So, let the sun shine on you and have a very great day, you hear?﻿
Posted by Dizzy-Dick at 11:22 AM