I got wondering about buffalo nickles.  Did you know that in 1913 there were two different designs coined and released into circulation?  That seemed odd to me and of course I had to check a little further and discovered the reason.  Can you guess what it was?

The first picture is of an early 1913 stamping of the nickle: 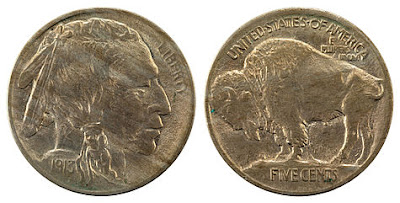 This next picture is also of a 1913 nickle but a later stamping.  Can you see the difference? 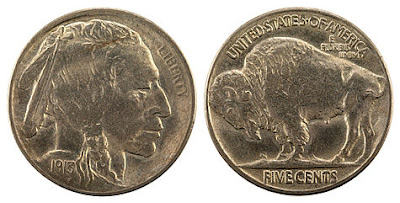 The difference was on the back of the coin.  The coin on the left was the early stamping and the one on the right was the later stamping. 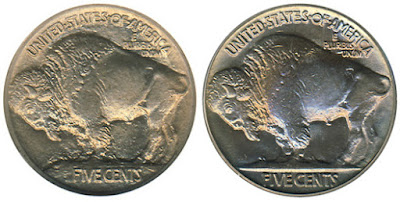 The buffalo in the first stamping was shown standing on a raised mound.  The later stamping shows a little bit of the mound but has a raised line underneath just above where it says "FIVE CENTS". That raised line was put in to help protect the inscription of "FIVE CENTS" from wear and thus to help keep it readable for a longer time.

Isn't it amazing what one learns just by browsing the internet.  Yep, I found the above information at:
http://buffalonickel.org/1913-buffalo-nickel-type-1-and-type-2/

Go to that site if you want to read more about the two types of 1913 Buffalo Nickles.  Now, you all have a great day, you hear?