Wondering about a 'Super Load'.

It started out as a typical Friday as my wife and I were heading for town, then we were surprised to see a huge tank trying to get through the intersection of highway 105 east and the north east loop 336 that goes around Conroe. When you get to see something like that, you don't mind the holdup of traffic.  We followed the procession up the Loop until they turned off to skirt around town.  No way could they get that thing through town without disrupting everything for hours.  I was lucky enough to have a front row seat to the spectacle.  The unlucky thing is, although I always carry my camera with me, I didn't have it that day.  I sure did miss some good shots of a strange load.

Then, last night, my wife said that as she was looking at the local newspaper on line, she saw an article with pictures of exactly what we saw.  Now I have pictures that I can show you along with a link to the news story.  There was a crew that accompanied the tank whose job it was to hold up any overhead wires that may not clear the top of the huge tank.  Wouldn't it be fun to be the guys riding up in the buckets? 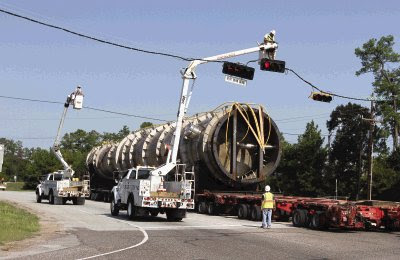 Yes, of course, they had a police escort which stopped traffic when necessary.﻿ 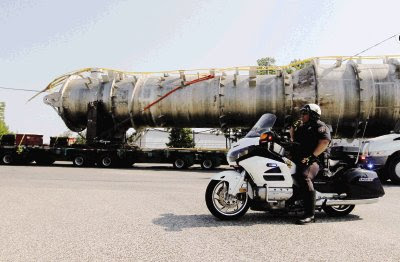 Another shot of the guys holding up the wires and lights.﻿ 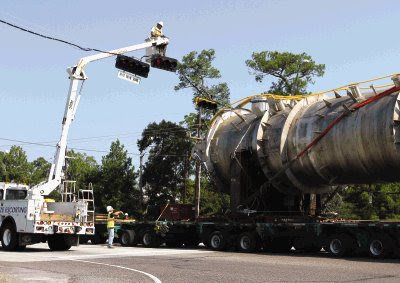 The picture below show just how long this tank is:﻿ 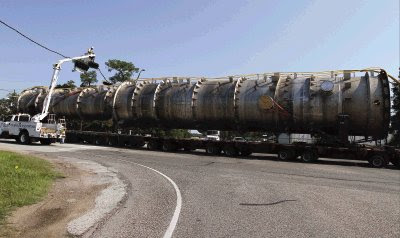 If you are interested in reading the news article, here is a link to it: CLICK HERE

My guess is that it is a cracking tower.  The load started in Baytown and I wonder if it was made over seas, like in China, or if it was made in Baytown.  It has been a long time since I have been in Baytown and don't remember any place that makes tanks, but that doesn't mean that there isn't any.  Sure hope your day today turns out great, you hear?
Posted by Dizzy-Dick at 8:05 AM