Wondering About The Night Sky

I like being out side and I like to be out at night. The being out at night started me wondering about the night sky. Well, with raising a family and trying to make a living, it sort of got pushed to the back burner, the doing something about it, not the wondering. Then one day I purchased a magazine off while out shopping. It was "Astronomy". I read it from cover to cover, then subscribed to it. I am still getting it and am still reading it from cover to cover.

Then one day I took my wife to some yard sales and one of them had a small telescope for sale at a "give a way" price that I just could not refuse and it found a home with me. It had a 5" diameter tube, but only about a 3" diameter main mirror. Not a "big" scope by any means but one that worked and would open up a whole new world to me.

Spent a lot of time with that scope. It had a long focal length and was on an equatorial mount. It really was a nice scope. I saw some amazing things. Of course the fist time you see Saturn, it is awesome, and Jupiter with all it's colors and moons. But my favorite things to view were, and still are, globular star clusters and nebulae.

I did have some once in a life time experiences and maybe even greater odds than that. The first one was I was intently gazing at a emission dust cloud and all of a sudden a lighted window with a person in it flashed by. I jerked away from the eye piece with shock until I realized what really happened. I live around 20 miles or so (as the crow flies) north of the biggest Houston airport. A plane had taken off and must have done just a gradual ascent and passed my scopes field of view at a fairly low altitude or it was business jet coming into or leaving the Conroe airport which is only a few miles from my. Either way it was a shock. . .

The other experience was even better, cause it most likely will not happen again soon, if ever. And, I didn't realize what I had seen until the next day. Well, what happened was that I was observing Jupiter and admiring all the bands and spots and then I saw a flash near the edge of the planet. I later found out that it was the comet that broke up and hit Jupiter. Yep, over the next few weeks I kept going back and looking at all the dark marks on Jupiter's surface caused by the pieces of comet. What good luck I had.

I guess I am rambling on too much, but do have to tell the rest of the story.

I decided that I needed a bigger scope. I checked the adds and found a Meade Dobsonian with a 16" primary mirror. My wife asked if I purchased it, where would I store a big thing like that. Well, at the time (never have seen one in person) I pulled out a tape measure and showed her 16 inches and that it would probably be about 4 foot tall and could just sit beside the fireplace.

I was working a project at a manufacturing plant when my wife called and said an eighteen wheel truck driver called and wants to know where he can unload a shipment for me. Great, I thought, here comes my telescope. I called him back and we both agreed it would be easier for him to unload at the loading dock at the plant I was at. Well, what a surprise I had, when the fork lift brought out two huge crates. They put them in my truck and I took them home to find it was a little bigger than I had imagined. Here is a picture of the pieces: 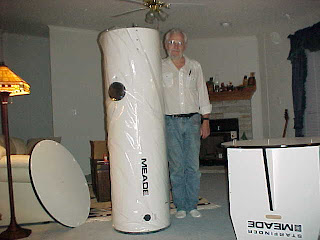 The mirror alone was about 100 pounds, more or less. Well, I managed to get it put together: 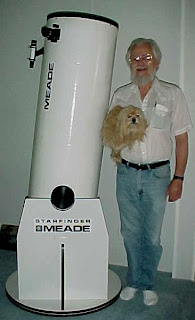 And get it outside to use. Had to build a cart to move it around on: 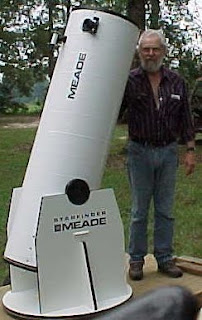 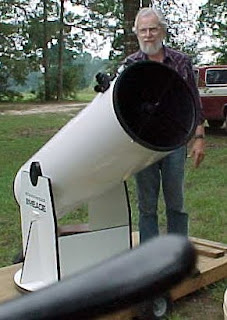 In 2003 I went to my first "star party" and Lake Whitney State Park. That State Park had an air port and that allowed for a better view of the sky. 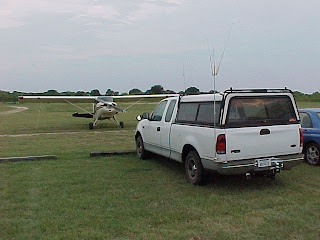 And here are views at the star party, setting up and waiting for night fall. 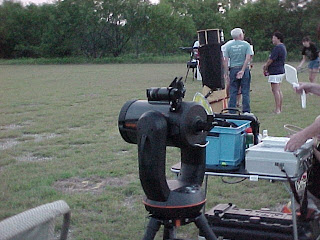 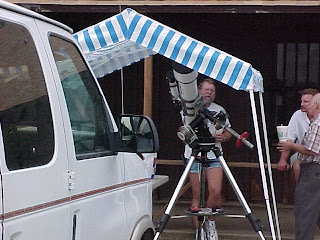 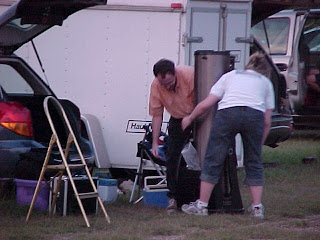 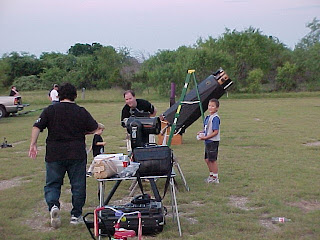 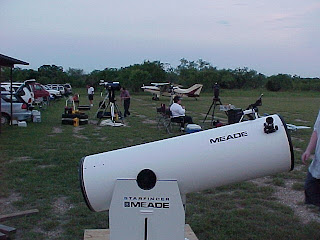 There are a couple of reasons why I don't use it as much as I used to, other than getting old and lazy. One is the weight and size, shipping weight was 265 lbs. The other is transportation. When I owned a pick-up truck with a cap, I had a weather tight place to haul the scope around. I no longer have a truck and I have no way of transporting it.
The newer models break down into pieces. I was wondering if I could cut the middle out of the tube, cut some lightening holes or slots in what is left and use aluminum tubing to hold it together with some system to always get it back together in the same exact place. I sketched up this idea. What do you think: 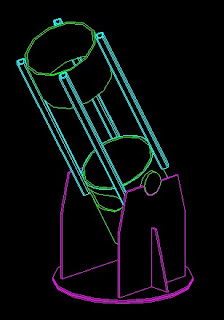 You only need two tools in life ~ WD-40 and Duct Tape. If it doesn't move and should, use the WD-40. If it shouldn't move and does, use the duct tape.