Got to thinking about some old experiences. The "Fat Man Adventures" http://ofmadventures.blogspot.com/ blog posted late last night showed pictures of wooden boats. Barney likes and has kayaks and I have and like canoes. Both my maternal and paternal grandparents lived along the Allegheny River in Pennsylvania in small railroad towns, Foxburg and Phillipston. My paternal Grandpa was a conductor for the B&O and my maternal Grandpa was an engineer for the PRR. Foxburg was unique because it had a double-decker bridge, cars on the lower level and trains on the upper level. 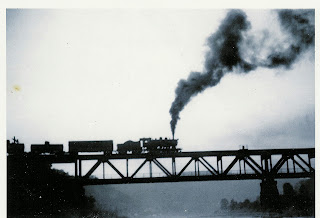 This is an old 1950 picture showing the Foxburg bridge and a B&O engine. The cars used the lower portion. There was a lot of public pressure to restore this bridge, but they lost out a couple of years ago when it was demolished and replaced by a new cement automotive bridge, no more RR.

Just down the river a few miles was the city of Parker. At one time, it held the title of the smallest "City" in the U.S.. I am not sure what the rules are to determine if a place is a city, a town, a village, etc. Do you know?

Anyway, it had a bridge that had a steep incline from one side to the other. Back when I was a boy, it was the only bridge of it's size that did so.

A lot further down the river is Phillipston. It, too, was a railroad town that had a round table for turning engines around, a maintenance shop, and living quarters for the railroad crews.

OK, got off the subject some. What I want to say is I spent a lot of time on the river and most of it in canoes or row boats. In fact, I was in a canoe before I could walk. I inherited a Kennebec and an Old Town, both fabric covered. Toward the end of their lives, I exchanged the fabric for fiberglass. I remember one time before the fiberglass, when I was putting new fabric on the Kennebec, I got the idea on how to get it real tight. I went to our local small airport and got some of that dope that they used to shrink the fabric on airplanes. (Are you old enough to remember fabric covered airplanes? I have been in a few). Boy was that a mistake. It did too good of a job, pulled the fabric loose from the gunnels and dang near buckled the canoe. Live and learn.

This is not where I planned to go with my blog this morning. Got way off the track, but hope you enjoyed it anyway. I was going to tell you about a few unusual places that I have been, that was, until I read Barney's blog and saw the wooden boat pictures. Just sort of brought back some memories. I really had a good time when I was a kid. Would do it all over again at the drop of a hat, if I could.

And remember, save all those wooden nickels that nobody else wants. You may need them some cold, damp morning to start a fire.