We had a little excitement at the flea market today.  My wife was set up this weekend and I stayed with her today.  All was going along as usual until we heard a loud bang a few tables down toward the entrance and the highway.  I figured that there was a wreck out on the road, maybe someone pulled out in traffic and got hit.

I decided to take a walk down that way since we were set up not far from the entrance.  It was not out on the road.  Someone smashed into a vendor's van, his tables, and was stopped by a steel H-beam post that supported part of the roof.  Here is a picture that I took: 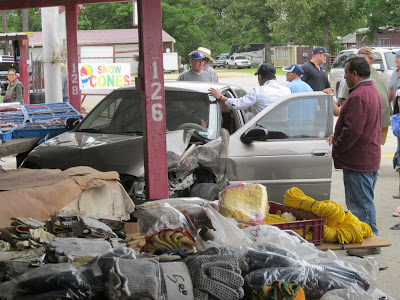 That created a real mess.  Tables and sale items all over the place.  Aisle walkway blocked.  The policeman on duty there called it in and a firetruck and an ambulance and of course, more police showed up.  The driver had some kind of seizure and his foot floored the gas peddle, so the driver was the only one that needed treatment.  It sure could have been a lot worse if  he had not hit that pole, which stopped the car.  The aisles on the other side of those tables were full of people; men, women, and children.  Hate to think what would have happened if he had not hit that pole first.  That kind of excitement I can do without.  Now you all drive carefully, walk alertly, and have a great day, you hear?
Posted by Dizzy-Dick at 5:52 PM