An Updatne on Yesterday's Posting.

I took my Jeep back to the place where I had purchased the tires and asked them if the tire was fixable.  The first guy said that it wasn't, because the nail was too close to the edge of the tread but the second guy said yes, he could fix it, and he did.  I had them take the new tire that I had as a spare off the wheel and put back on the tire carrier on the rear of the Jeep.  They then put the tire back on with the new plug in it.  I wanted to drive on it to make sure it would hold up, since there was a difference in opinion on if the plug would hold.  So far so good.

When I got home, I didn't park it where I usually do, but left it in the driveway.  Then came the job of picking up the nails.  That couldn't be a big job, right?  My wife brought me out her extra strong magnet mounted to a telescoping rod.  I found it easier to sit down on the ground and pick them up with the telescoping rod collapsed to its shortest length.  I couldn't believe how many I was finding.

It was getting hard to find them in the tangled grass, so I went in and found an awl.  That worked quite well.  So, I sat back down, this time with a bag to put them in.  The more I dug the more the magnet would pick up.  Gee, I found a nail mine and now I am strip mining for nails!!  I just couldn't believe how many I was finding.  In case you doubt me or think that I may be exaggerating, here are a couple of pictures of the ones that I found: 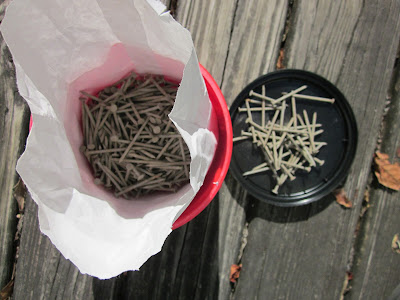 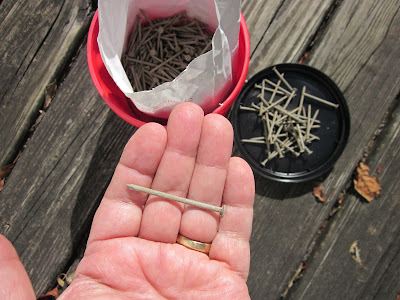 Yes, I found all these nails where I usually park the Jeep.  I guess that all those years, they were just laying flat and the other day one decided to stand on its head for awhile.  There is more than a pound or two of nails in that large coffee container and they are all the same size.  For size comparison, I held one in my hand, in the lower picture above.  Now, don't any of you run over any nails but have a great day, you hear?