I know that I have talked about Texas (the state that I live in) before, but I thought that I would just post some jokes about Texas that I found on the internet.  I hope you get a grin or two or so out of them.

****************
The aspiring psychiatrists were attending their first class on emotional extremes. "Just to establish some parameters," said the professor to the student from Arkansas, "What is the opposite of joy?"

And the opposite of depression?" he asked of the young lady from Oklahoma.
."
"Elation," said she.

"And you sir," he said to the young man from Texas, "how about the opposite of woe?"

The Texan replied, "Sir, I believe that would be giddy-up 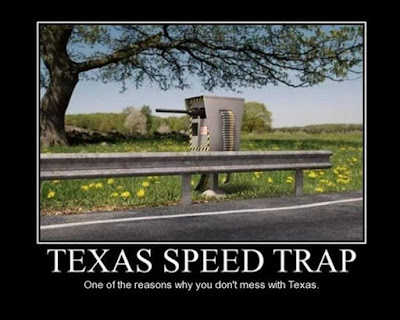 The Texan pulled out an expensive bottle of tequila, took a long draught, then another, and then suddenly threw it into the air, pulled out his gun and shot the bottle in midair.

The Californian looked at the Texan and said, "What are you doing? That was a perfectly good bottle of whiskey!!

The Texan replied, "In Texas, there's plenty of whiskey and bottles are cheap.

A while later, not wanted to be outdone, the Californian pulled out a bottle of wine, took a few sips, threw the half full champagne bottle into the air, pulled out his gun, and shot it in midair.

The Nevadan couldn't believe this and said "What the heck did you that for? That was an expensive bottle of wine! The Californian replied, "In California there is plenty of wine and bottles are cheap."

A while later, the Nevadan pulled out a bottle of Sierra Nevada Pale Ale. He opened it, took a sip, took another sip, then chugged the rest. He then put the bottle back in his saddlebag, pulled out his gun, turned, and shot the Californian.

The shocked Texan said "Why in the hell did you do that?"

The Nevadan replied, "Well, in Nevada we have plenty of Californians and bottles are worth a nickel.

A cowboy rode into town and stopped at a saloon for a drink. Unfortunately, the locals had a habit of picking on strangers. So when he finished his drink, he found his horse had been stolen. He went back into the bar, handily flipped his gun into the air, caught it above his head and fired a shot into the ceiling. ''WHICH ONE OF YOU SIDEWINDERS STOLE MY HOSS?'' he yelled. No one answered. ''ALL RIGHT, I'M GONNA HAVE ANOTHA' BEER, AND IF MY HOSS AIN'T BACK OUTSIDE BY THE TIME I FINISH, I'M GONNA DO WHAT I DONE IN TEXAS! AND I DON'T LIKE TO HAVE TO DO WHAT I DONE IN TEXAS!'' Some of the locals shifted restlessly. The cowboy had another beer, walked outside, and his horse was back! He saddled up and started to ride out of town. The bartender wandered out of the bar and asked, ''Say partner, before you go... what happened in Texas?'' The cowboy turned back and said, ''I had to walk home.''

OK, that is enough for now.  I sure do hope I have left you with a grin on your face.  I love Texas and have been here for over half my life and would not want to move to any other state.  Now, have a great day, you hear?