I am an RVer and I bet a lot of my readers are, too.  If you are or have been an RVer or know someone that is, then you probably have heard of the Good Sam Club.  Good Sam Club and Camping World are 50 years old this year.  Hard to believe that they have been around that long although I had some form of RV for almost that long. 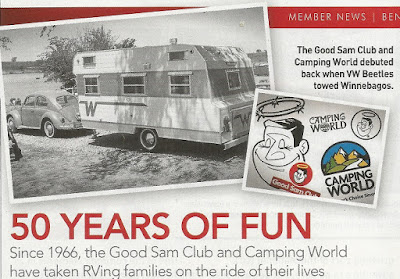 I started out with a pop-up camper that had a solid bottom and roof, but when opened up, had canvas sides and ends that slid out with beds for sleeping which left most of the 25 foot box open for daily living.  Had lots of storage and we made good use of it.  When I moved a couple of times, it was our temporary home until we could get settled.  Then one day, when I lived near Justin, TX (north of Fort Worth), a tornado flipped it end over end and it just came apart.

After that, we got a bumper pull travel trailer which both my wife and I really liked.  Then I traded it in for a class-C.  All three of those RVs got lots of use and we liked every one of them.  Now I have a diesel pusher which is shown in my header picture.  So, over all that time and different RVs, I have been to camping world and at one time, was a member of the Good Sam Club.  So what now?  Maybe I should sell this last RV and settle down to old age and my rocking chair.  Now, where would be the best place to advertise it?  Maybe instead of trying to sell it myself, I could take it down to PPL Motor Homes, where I bought it in the first place.  Now, you all have a great day, you hear?